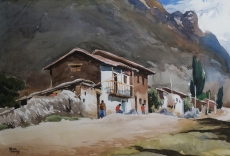 Born in Arequipa – Perú in 1948, he studied painting from age 17, with the most famous painters of his town. Later he studied in the art School of Arequipa and Cusco.

He won his first award in 1976 in Cusco which was the key to get to the capital city where he had his first individual exposition, he also obtained other important national awards in 1985 and 1996. He also participated in many individual and collective expositions since 1971 and his work is all around the word.

In his pictures of landscapes and human figures, he shows his acquired compromise with his land and its citizens applying traditional techniques of an easy understanding and formal style where science of color and technique of drawing are its real protagonists.