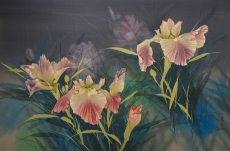 David Lee was born in Canton, China in 1944 and in 1946 moved with his family to Hong Kong, where he was raised. David Lee began painting at age 4. He was educated in Hong Kong and attended Taiwan University, where he received a B.A. in Fine Arts. He also attended Kaoshung University in Taiwan and the Far East Academy of Art in Hong Kong. David Lee was trained in the classical tradition of Oriental brushwork. Not only a master of technique, David Lee does not simply reproduce what nature presents but expands his imagination. Lee has perfected a rich sense of composition and style combining the delicate loveliness of watercolors on silk with Western concepts of design. Lee was the youngest winner ever of the prestigious Chinese National Painting Competition. After moving to Hawaii, where David Lee initially worked for the Consulate General of the Republic of China in the Foreign Affairs Department, David Lee devoted himself to his artwork full-time. He has had numerous one-man shows throughout the world including Hawaii, the U.S. Mainland, Canada, Japan, France, Germany, Switzerland, and Taiwan. David Lee’s paintings hang in the permanent collection of the Taiwan University, in the National Museum of Taiwan, and the Chuk-Yun Museum in Hong Kong. Worldwide, his art is shown in over 300 art galleries, universities, and museums, as well as many noteworthy private collections in the U.S., Asia, Europe, and Canada, including the collection of the Imperial Family of Japan. Among the numerous honors David Lee has received are awards from the government of the Republic of China, the government of Switzerland, the City and County of Honolulu, and the City of Osaka, Japan, where he received the Gold Key to the City for his achievements.