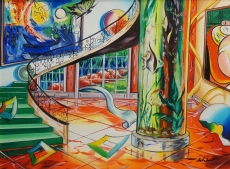 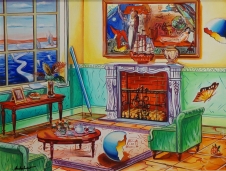 Alexander Astahov is known for his colorful, surrealistic style and his signature butterfly, featured in each of his works. His series of magnificent interiors pays tribute to the masters, including Miro, Chagall and Van Gogh.

Astahov was born in Petropavlovsk, Russia in 1955. He studied at the High School of Arts in Oryol from 1972 till 1977 and later completed Post Graduate study and work at the Moscow Surikov High Art Institute. In 1982, Astahov began working as an art teacher at the Bryansk School of Painting, where he specializes in graphical arts.

In 1995 he became a member of the Artist Union List of Russia in graphical art. Astahov has exhibited in Russia and abroad, and his personal exhibition was held in Bryansk in 1998.