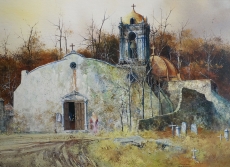 From Kansas City, Missouri, Frank Moss Hamilton became a noted watercolor painter in California, where he lived in Cambria. He was a teacher at the San Francisco Art Institute. Between the 1940s and 1970s, he had one-man exhibitions in Laguna Beach at the Festival of the Arts, winning first place awards 1963 to 65. He also exhibited in New York City, at Humboldt State College, the Franklin Mint Yearly Western Show where he won first prize in1972.