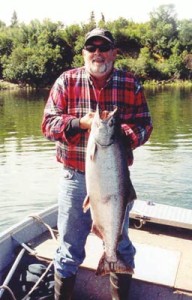 Robert’s experience with realism started at a young age while climbing the mountains of the Northwest. Climbing companions such as the Whitaker brothers (first Americans to conquer Mt. Everest). Leroy Ritchie, and many others flavored his teen years with thrills, excruciating finger-hanging experiences all encased in the fabulous scenery afforded from Mt. Rainier, Mt. St. Helens, Mt. Baker, Mt. Hood – to all of the major mountain peaks of Washington, Idaho, and British Columbia, Canada. The frosting on Robert’s climbing career happened when he was in his 20’s and he and a group of buddies were the first-and-only to ever assault the West Wall of Mt. Rainier. A fitting finish to a climbing career that was the starting point for his almost 40 year career painting those same beautiful mountains.

In 1974, early in Robert’s career, he received his first award at then Puget Sound College. Since then, he has received numerous awards at the ten-or-so shows he does each year. Robert’s paintings are showcased in galleries located in Washington, Wyoming, California, Arizona and Montana. His web site (robertwalton.com) is a reflection of all his current works, including originals, giclees, lithographs and a web-gallery of his sold originals on which the occasional commission is based.

Murals were a huge part of Robert’s life up to and including the 6,356 square foot mural in Heppner, Oregon which was dedicated in the summer of 2005. He has been part of many ‘Mural in a Day’ projects in Toppenish, WA, including designing and directing one of those one-day miracles himself. He has also done several other murals in Toppenish, entirely by himself.