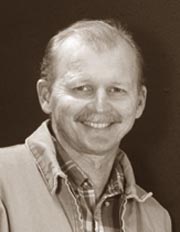 He was born in Akron, Ohio, and was raised on a ranch where he developed a love for the subject matter he later depicted in his paintings.  From 1966, he lived in Cody, Wyoming, where his parents bought a dude ranch on which his father was outfitter and guide.

Serving in the marines, he spent eighteen months in Hawaii and then enrolled in art study at Arizona State University at Tempe.  But he quit formal education because he thought he could learn more on his own and from his neighbor, cowboy artist James Bama.

He has had a successful career, doing about twenty paintings a year, many of them with thirty or more thin layers of paint.

Early in his painting career, he did landscapes, still lifes, and people scenes, but then he became inspired by western paintings he saw by Charles Russell and was so impressed that he even reversed his own initials to be like Russell.