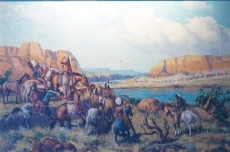 Custer’s 7th Calvary
from the Indian’s
Point of View 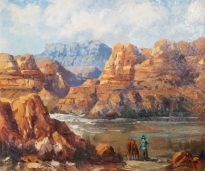 A Bend in the Colorado

Marco Antonio Gomez “Tony” was born in Durango, Mexico in 1910.  He was 8 years old when the family moved to Ashfork, Arizona.  His father was a recognized portrait painter.  Young Tony was raised among paint pots and canvases and one day had encroached upon his father’s creative endeavors with a misplaced brush stroke.  His father initially gave his son paints and canvas with the admonition: “You paint your pictures and let me paint mine”, or words to that effect.  Later his father taught him.  Much of the artist’s work springs from his background in mountainous northern Arizona.  He grew up with intimate knowledge of the area’s Indians, whom he rode and played with, and witnessed many of their now forgotten rituals and absorbed the “feeling” of the country.

He moved to California during the great depression.  He teamed up with two other young artists to share living costs in a downtown Los Angeles apartment of highly debatable quality.  The times were hard; meals were somewhat less than glamorous; patience and fortitude were necessary virtues.  It was a period of gestation, with time to develop, learn and strengthen.  He attended the Chouinard School of Art.  When war came in 1941 he joined the military and became the official artist for the 433rd fighter squadron. Upon returning home to civilian life he received his American citizenship.  An event he says was his greatest honor in life.

He met and married his wife of twenty years Margery, and felt the need to hold a steady job and relegate his art to night lights.  The time came, however, when the urge to paint won out over holding a steady job.  Tony declared his intent of artistic independence to his wife, and she supported the decision.  They made frequent trips to the southwest criss-crossing the lands of his youth, spending weeks and months among the Indians of the great southwest and into the plains country, researching, sketching and painting.

Tony and his wife lived about a block from the the ocean in Manhattan Beach, California, yet he painted only a few seascapes.

On his last painting trip into the southwest in 1972, Tony took ill and returned home to California where he died within a few weeks from cancer.

In May of 1971, Cody Wyoming’s Whitney Museum and Gallery of Western Art honored Tony with an exhibition of his paintings.   This event is detailed with some photos of his paintings in the March 1971 issue of the Westerner Magazine.

In 1973, Grand Central Galleries Inc. of New York held a retrospective of his work.