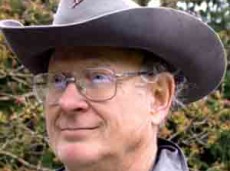 A painter who has much love and energy for making art, Hulan Fleming creates canvases that reflect a wide variety of experiences including African safaris, old-fashioned wagon rides, camping by the ocean, and general travels in the American West.  He was born in Todville, Iowa, and at age seven, moved to Florida with his family.  When he was fifteen, his mother, sensing his talent, enrolled him in a correspondance art course of Art Instruction Inc.

Four years later, in 1953 at the time of rhe Korean War, he joined the armed services, and served as Company Painter for the 83rd Engineers in France.  During that time he did much traveling in Europe, especially Italy, France, and England.  Following his discharge, he was a technical illustrator for Boeing Company.

In 1957, he enrolled in Seattle Pacific University, married a year later, and in 1962 earned a degree in Physics and began a career as an engineer for Boeing.  Later he returned to school to get a teaching certificate, and for three years was a science teacher.  During this period, he was spending time painting, which included gallery representation and one-person show.  In 1968, he became a full-time painter.  Often painting en plein aire, he describes his style as ‘realistic impressionism’.