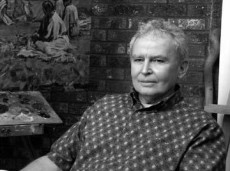 Impressionist painter and sculptor of Western figures, particularly Indians and children, Gary Schildt was born in Helena, Montana, in 1938. Eleven-thirty-seconds Blackfoot, Gary grew up on his family’s ranch on the Reservation near Browning. As a youth, he evidenced a talent that was sharpened when he studied commercial art and photography at the City College of San Francisco. He is noted for his sensitivity and artistic excellence in virtually all mediums, is a charter member of the Northwest Rendezvous Group, and a consistent prize winner at several art shows. In recent years, he has traveled a great deal, finding, in his words, that “travel gives an artist a greater comprehension of human nature and the human condition.” Gary Schildt in 1999 received the Montana Governor’s Award for the Arts. Currently, he lives and works in Oregon. He was among the top 100 artists chosen at the 100 Annual Arts For The Parks exhibit. In 1998, he did a series of forty three paintings of the Blackfeet Sundance and are now on permanent exhibit at the C. M. Russell Museum in Great Falls, Montana.