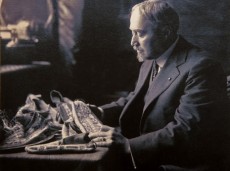 Eanger Irving Couse (1866–1936) was an American artist and a founding member and first president of the Taos Society of Artists. He is noted for paintings of Native Americans, New Mexico, and the American Southwest. His house and studio in Taos have been preserved as the Eanger Irving Couse House and Studio—Joseph Henry Sharp Studios, which is listed on the National Register of Historic Places and the New Mexico Register of Cultural Properties.