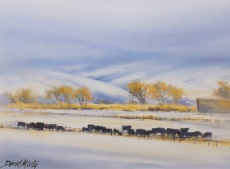 A native Californian, David has been living in and painting the beautiful Pacific Northwest for over 30 years. David grew up in Palo Alto, California and has been living in the Pacific Northwest for over 30 years. David’s career took him in the direction of graphic design and illustration. After working for a publisher, he opened a successful graphic design studio. But David’s first love of painting resurfaced and for the past several years he has concentrated on painting. He is becoming increasingly known for his rural landscapes. David has been featured in American Art Collector and Western Art Collector magazines and an “Artist to Watch” in Southwest Art Magazine. His work has been used on Extreme Makeover: Home Edition and Celebrity Apprentice.David works in oils on canvas. Many paintings begin as plein air studies.