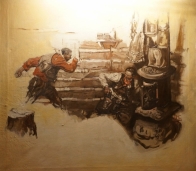 Born in Coshocton, Ohio, Benton Clark became an eastern illustrator of the West in the dramatic tradition of Frederic Remington and especially loved painting horses. He also did murals that are in Chicago and Columbus, Ohio.

Growing up in Coshocton, he had a picturesque rural setting of woods and valleys near the old Ohio Canal. A group of artists were working there, and one of them, Arthur Woelfle, gave Clark his first lessons and encouraged him to seek further training. Later Woelfle said that of all his students Clark was the most talented.

In 1913, he went to New York City to study at the National Academy of Design and in 1915 to Chicago at the Art Institute. He sold magazine cover and calendar illustrations and in 1925, began illustration work for “Liberty” and “Outer’s Recreation” magazines. He also illustrated for “Saturday Evening Post” and had a period of working for Metro Goldwyn Mayer’s art department in Culver City, California.

Major influences on him were Harvey Dunn, Frank Hoffman, and Frederic Remington, and in 1932, he became a member of the Society of Illustrators. In 1932, he returned to New York City and did western illustrations for leading magazines such as “Saturday Evening Post,” “Mc Call’s” and “Good Housekeeping,”, a job that took him West for subject matter.

He shared a studio with his brother, Matt Clark, also a noted illustrator. He died in his hometown of Coshocton, preparing to do an historic mural for his high school.