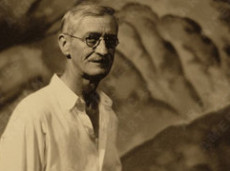 William Penhallow Henderson was an artist of many talents. Besides being an important painter, he was a builder of beautiful homes and furniture. Henderson journeyed from Chicago to Santa Fe with his tubercular wife for the healing climate and treatment at the local sanitarium. They became leading early citizens in the development of the city’s cultural affairs.

Henderson first came to Santa Fe on a wagon ride with his mother in the 1880’s. Henderson’s parents at the time had a cattle ranching business in Texas and were unsuccessful. They returned to their hometown of Medford, Maryland where Henderson went to school and received his beginning art education at the Boston Museum School. His mentor was the American Impressionistic painter, Edmund C. Tarbell. Henderson won a scholarship for two years of study in Europe. He studied the old masters with Velázquez being his biggest influence. During this time, he fell in love with color.

Henderson returned from Europe and taught at the Academy of Fine Arts in Chicago for six years. He married Alice Corbin, a poet and assistant editor of “Poetry” magazine. He designed murals for Midway Gardens commissioned by Frank Lloyd Wright and also designed the scenery and costumes for the Chicago Fine Arts Theatre production of “Alice in Wonderland.”

Once the Hendersons were in Santa Fe, a new burst of creativity transpired. Henderson became a member of the New Mexico Painter’s Society and started showing his fauvist love of color and distinct form of Expressionism in his paintings. His works went on exhibit at the Roullier Galleries in Chicago to great reviews on his new vision of viewing the local landscape. Being far from the center of the major art markets, made Henderson take on a variety of occupations to support his family. He painted camouflage on ship hulls during WWI, formed a building company and designed and built many buildings and furniture in Santa Fe that came to be known as “Santa Fe style.” Henderson painted murals for the Santa Fe Federal Court Building for the WPA. . Being a passionate advocate for Native American arts and crafts, Henderson designed the Navajo House of Religion, built in the style of a Navajo Hogan in Santa Fe which is now called the Wheelwright Museum of the American Indian. He died in Tesuque, New Mexico in 1943.

His work is included in many museum collections such as: the Denver Art Museum, Eiteljorg Museum of American Indians and Western Art and the Smithsonian American Art Collection.