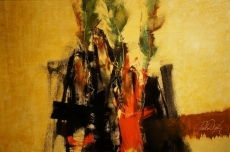 Woman of the Willow

The art of Paul Dyck encompasses a full range from realism to abstract. He was raised from infancy in the spirit of art and served his apprenticeship under an uncle, Johann von Skramlik, in his various studios in Prague, Paris and Rome.

Paul Dyck became a foremost authority on American Indian Art and culture and assembled one of the finest and most important collections of American Indian ethnological material. For more than half a century he was a rancher and lived in Rimrock, Arizona. He believed that the life and closeness to the soil is a way of sincerity in art.

Paul Dyck was born in Chicago in August, 1917. His family, originally from Europe, lived in Canada, Chicago, and St. Paul, Minnesota before returning to Europe in 1921. Paul then went to school, but it was decided early that he was to train to be an artist and was went to apprentice with his Uncle Johann van Skramlick, a well known European portrait painter. Paul returned to New York in 1934. He stayed in New York for about three weeks making his first $35.00 then immediately headed towards the Plains. He went first to South Dakota to see his most sacred friend One Elk. In 1935 Paul became a motorcycle Joe and traveled throughout the west for the next several years. He would return to the East in winter to do freelance illustration work to ear money. While he was travelling he would make Indian sketches and sell them for 50 cents or trade them for meals and other necessities to keep his motorcycle going to the next place.

Paul settled in Arizona in 1938. He found his piece of heaven in the Verde Valley (Rimrock, Az). A 300 acre ranch that had fallen into disrepair, but he knew from the moment he saw it “this is it”. He ranched until he went into the Navy in 1942, after returning he was never to leave again.

Paul didn’t have a great taste for art after his time in the Navy as he wanted nothing but to farm and build his ranch into something sound and prosperous. Before the war painting had been just a way to make a living, and not an inspiration. It was in 1953, he is known to have said “all of a sudden I could paint”.

It was with a painting called “The Dawn” of horses, running horses, that somehow his inspiration and spiritual outlook changed. After this painting there was an avalanche of paintings. Paul had become a painter that people accepted as valid. He became something of a sensation. He went on to have 65 one man art exhibitions all over the country, New York, Chicago, Los Angeles, Tucson to name a few.

After 1954 he not only returned to art but he also returned to the visiting the Plains often, as the Plain Indian people and the Buffalo Culture were his most important inspirations. He went on to paint, study, write, lecture, and most of all collect one of the most extensive privately owned collections of Plains Indian artifacts known.