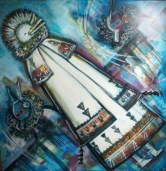 Mary Morez was born in 1946 in Tuba City, AZ. Her parents died when she was young and she was raised in a traditional home by her grandparents on the Navajo reservation in northern Arizona until she was sent to Phoenix Indian School for her education. While there, she was adopted by a non-Native family. She continued her studies at Maricopa Technical College, Ray Vogue School of Art in Chicago and she also studied at the University of Arizona in the summer of 1960 through a scholarship from the Southwest Indian Art Project.

Although she stayed close to her cultural roots through her grandparents and her own artistic study, she never returned to the reservation to live. She spent the majority of her professional life in Phoenix, AZ where she worked in commercial and fine art. She had her first one-person show at the Heard Museum in 1970. She never let herself be defined by a single style but her fine art work was decidedly modernist. Mary was plagued with complications resulting from polio as a child and there was a period of about 15 years where she was too ill to do much artwork. In the 1990’s she began to paint again and worked up to her death in September 2004.

Mary’s work has been exhibited throughout the United States and in Europe, including the Wheelwright Museum, the Heard Museum, the Brooklyn Museum of Art and the Institut fur Englische Philologie der Universitat in Wurburg, Germany. In addition, her illustrations were published in the Navajo Times, the New Mexico Review, and The Legislative Journal with commercial artwork for the Phoenix Indian Center, the Native American Film Festival, the US Dept of Health, Education and Welfare and jackets for Canyon Records, among others.

Mary also volunteered extensively at the Phoenix Indian hospital. She said of her life, “I want to know I’ve left something behind. Not as an artist but as a human being who loves and cares and tends and helps other human beings. To do that is to walk in beauty.”