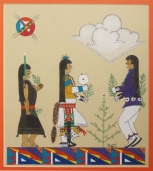 J.D. Roybal’s paintings focused on dance ceremonies of the San Ildefonso, and were characterized by multiple figures (often including more than 50 dancers in a single painting).  His most popular subject matter was his rendition of the Tewa Clowns known as Koshare or Koosa. Often he presented them in a jovial whimsical manner.

His devotion to traditional Pueblo painting made him one of the more important San Ildefonso painters.  His works are included in such noted museum collections as the Museum of Northern Arizona (Flagstaff, AZ) and the Millicent Rogers Museum (Taos, NM).