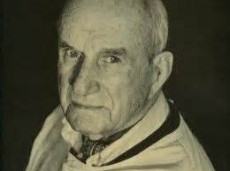 Emil Bisttram, born in Europe in 1895, immigrated to New York with his family in 1906. They settled in the Lower East Side and Emil attended school until 1910, when at the age of sixteen he was expelled for “beating up several teachers.” Instead of returning to school, in 1911 Emil Bisttram became the leader of the Gas House Gang which was involved in the infamous New York street fights between Irish and Jewish ghettos. Deciding to turn his skills into a source of income, Bisttram became an amateur fighter known as “Battling Bennett”, and fought in the ring until he was nineteen. Admired for his boxing skills, the owner of commercial art firm, who was also a boxing fan, hired Bisttram and Bisttram’s career in art began. Bisttram is well known for the overwhelming variety of styles he employed throughout his career. In the early 1930s Bisttram was among the first Taos painters to revolt from the serious and studious painting style, which made the art colony famous two decades earlier. One respected, yet unnamed “aspen painter” declared “Bisttram should be tarred and feathered and wheeled out of Taos for bringing in that crazy modern art.” Dorothy Brett was the first Taos artist to defend Bisttram and Ernest Blumenschein, Eleanor Kissel and others followed