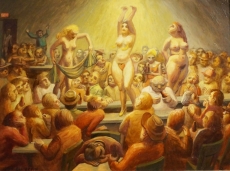 Eli Levin was born in 1938. He was raised in New York in an intellectual milieu, went to Music and Arts High School, and was influenced by the artistic movements of Social Realism and Regionalism. He studied with several politically leftist realist painters, including Raphael Soyer and George Grosz.

WPA art, Depression-era Social Realism, American Scene regionalism and German realism of the Weimar period are among the modern influences that have helped to shape Levin’s work. By the time he attended the Boston Museum School in 1960, he found New York School abstraction to be an oppressive force on the east coast. He was denied graduation from the Museum School on account of his commitment to practice realist painting. Against this background he was motivated to explore the West at the age of twenty-six.

In 1964, on a solo road trip, Levin discovered the New Mexico art community by way of Taos, nearly by accident. He met John Norton who was remodeling a gallery space on Ledoux Street. He met Emil Bisttram on his daily walks, and he met Ned Jacobs in his studio on the second floor of the Harwood. He swept out a garage on Ledoux Street, put up a sign naming it The Dead Cat Gallery and showed his paintings in it for a short while. Eventually, he explored further south to Santa Fe before going back to school at Wisconsin University in 1965. These experiences of an art community grounded in regional realism, an alternative to the movements and counter-movements of east coast art politics, would eventually bring him back. He settled first in Santa Fe where he has exhibited for nearly fifty years, later building a home in Dixon, NM.

Levin made his first etchings in the Boston Museum School and later spent a year as a teaching assistant in the etching studio of Wisconsin University’s graduate school. Etching enjoyed a renaissance in the mid-19th century European Etching Revival which continued through the Depression years. It figured prominently in American art between the wars and in the work that had an early influence on Levin. He continued to make and sell etchings into the 1970’s as he developed his signature painting style. In 1981, he formed a group of printmakers called the Santa Fe Etching Club, around his press that was previously owned by Santa fe artist Will Shuster, printer for John Sloan. The group has exhibited numerous times, twice in Taos, and continues today in its own studio space.

Levin’s practice has been to elaborate his themes in both etching and egg-tempera painting, sometimes rendering the same image in both media, often reworking a painting as an etching or vice-versa. The thrust of Levin’s life work has been to continue the styles and subjects of the Social Realists of the 1930’s into the time and place he lives. His work has been vitally concerned with social commentary and with narrative, even as the art-world tastes of his time have veered diametrically away from them.

Levin’s art-historical interests lie in the narrative paintings and graphics of early Renaissance through 19th Century realism, of the Ashcan School and WPA work, and wherever remnants of critical realism can still be found in painting. He appreciates the recent resurgence of Academic realist painting while regretting its general lack of narrative and social commentary.

Much of Levin’s work through the 1970’s and ‘80’s was known for its use of the bar-room as a vehicle for social commentary. This was partly rooted in his early work experiences in Santa Fe’s Claude’s Bar, but quickly became his first signature motif as he found in it a vehicle for any number of larger social themes. Variously ironic, parodic and sympathetic, the work has elements of Bruegel and Daumier, as much as Sloan and Benton, in its social critique and narrative style.

Also in the ’80’s, he completed an ambitious series of tempera nudes which, while painted from the model, explored themes of personality and location well beyond the simple studio setting. In the late 80’s, Levin began a lengthy series of paintings based on classical mythology, exploring narrative in a completely different context than the earlier “bar scenes”. Eventually, in the later ’90’s, he returned to Social Realist subjects, reprising the bar settings but also enlarging his scope to include the events of 9/11, immigrant workers, corporate politics and New Mexico Hispanic culture to name a few themes. Other large bodies of work comprise paintings of the nude in everyday domestic settings, as well as still-lifes of everyday objects, and landscape work around his Dixon studio and on his travels.

Much of Levin’s work in the last twenty years reflects his home and studio setting in Dixon, and rural life in Northern New Mexico, as seen in the Hispanic workers and the Dixon acequias in much of his work. In this he has kept faith with his earliest inspiration from figures such as Soyer, Benton and Hopper.