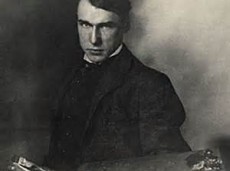 As an organizer of the landmark New York Armory show of 1913 (The International Exhibition of Modern Art), painter Walt Kuhn was a visionary of his era, introducing European modern art to American audiences for the first time. Kuhn’s daring personality was matched only to that of his art – theatrical, colorful, and hauntingly solemn at times. He is known as one of the first American Modernist painters.