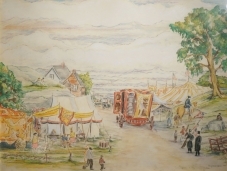 Reynolds Beal was an American Impressionist and Modernist artist. The elder brother of painter Gifford Beal, Reynolds was born in New York City. He and his brother Gifford spent their summers at Wilellyn in Newburgh, New York, on the Hudson River, and together they would later design the gardens at Wilellyn. His father was William Reynolds Beal, whose brother Thaddeus owned Echo Lawn, not far away.[2] Beal was a man of independent means, and was thus able to devote his life to his art without having always to appeal to the tastes of his patrons or to contemporary trends.

Beal showed artistic ability from an early age. He first studied at Cornell University (naval architecture), where he was a member of the Phi Kappa Psi Fraternity and the Irving Literary Society. Beal painted and sketched in and around Cayuga Lake. His home haunts of the East River were the first subjects of his work; in Sibley Hall’s drafting bays he learned further technique as a budding naval architect. Although the “Sibley time” constitutes his first artistic experience, it was not until the years following graduation that Beal became serious about a painting career.

Beal was active in the art community. By 1934, he was a participant in the Salmagundi Club, Lotus Club, Century Club, National Academy of Design and the American Water Color Society. He was also a member of the Society of American Engravers and the National Arts Council. His progressive tenets marked him as a “modernist”, and he helped found the Society of Independent Artists and the New Society of Artists, which consisted of fifty of the most important painters of the day, including George Bellows, Childe Hassam, John Sloan, William Glackens and Maurice Prendergast