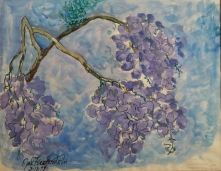 Opal Fleckenstein was born in Macksville, Kansas on November 19, 1911. She received a teaching certificate from Gooding (Idaho) College and began teaching in North Idaho, marrying Fred Fleckenstein in 1939, after which they moved to Spokane. Opal Fleckenstein began teaching for the Works Progress Administration in 1939 and was invited to have the first public showing of her artwork at the Pacific Northwest Annual at the Seattle Art Museum. She was also invited to show her work at the Henry Gallery at the University of Washington. She received a master’s degree from Eastern Washington University.

In 1948 she won the purchase award at the Pacific Northwest Annual and in 1950 she presented a one-artist show at the Seattle Art Museum. Fleckenstein also taught at North Idaho College, and in 1949, began teaching at Eastern Washington State College.

Interested in filmmakign she created documentaries on Mexican art and Hawaiian art, which helped introduce film making as an art to the EWSC curriculum. She had studied at the University of Hawaii and the San Miguel Allende Institute of Mexico. She also taught at the University of Saskatchewan in Saskatoon and at the American Institute in Guadalajara, Mexico. She presented an Art in the Humanities program on KSPS-TV in Spokane.

In 1976 Cheney Cowles Museum presented a retrospective of her work, and in 1983 and 1985 a collection of her batiks and other works was shown at All Hallows in London. She retired from Eastern Washington University in 1977 and was named professor of art emeritus at that time. Opal Fleckenstein died in Spokane on July 21, 1996.