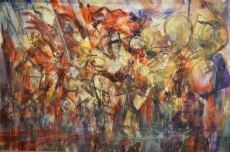 Nicholas Brigante’s family immigrated to the United States and settled in Los Angeles in 1897. By 1911 he was already painting ‘Bull Durham’ and ‘Coca Cola’ signs on barns while studying at the Los Angeles Art Students’ League under Rex Slinkard, an early harbinger of Modernism. After serving in World War I, he returned to the Art Students’ League, joining Stanton Macdonald Wright in the landmark 1923 exhibition “The Group of Independent Artists”. With his new bride, he spent 1924/25 in New York where his watercolors were exhibited alongside those of Charles Demuth, John Marin and Lorser Feitelson. His return to Los Angeles in 1925 defined his focus upon ‘man’s connection to nature’. These figurative approaches later evolved into poetic abstractions as Brigante explored, evermore deeply, Asian aesthetics and philosophies.