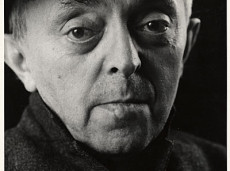 Moses Soyer was a significant figure in the American realist movement at the beginning of the 20th century. Soyer was born in Russia in 1899. He and his family, including his twin brother, Raphael Soyer, also a well-known artist, immigrated to New York in 1912. Soyer’s everyday experiences in New York, with its diverse population and bustling activity, were the primary inspiration for his art. Soyer’s training began at Cooper Union, National Academy of Design, whose formalistic curriculum he left in favor of continuing his studies at Ferrer Art School in Spanish Harlem. There, Soyer studied painting and drawing with the more advanced Ashcan school artists Robert Henri and George Bellows. Artists associated with the Ashcan school in the early years of the twentieth century sought to capture New York scenes through realistic and unglamorized representations of everyday life.

Known primarily for his drawings and oil paintings, Soyer had his first solo exhibition in 1926 and was awarded a scholarship enabling him to travel to Europe to study drawing. During the 1930s, when the United States was at the height of the Great Depression, the Works Progress Administration, a part of the New Deal, commissioned Soyer to paint murals in government buildings throughout the country. Soyer’s art emphasized the depiction of the natural attitudes, thoughts, and gestures of individuals in performing everyday tasks. Throughout his career, Soyer’s art remained close to the representational rendering and simple subject matter of the Ashcan artists and the realism of Edward Hopper and Thomas Eakins. After World War II, as many artists delved into Abstract Expressionism and Action Painting, Soyer continued to paint within the realist canon and achieved recognition for his work. He was elected to the National Academy of Design in 1963 and in 1966 to the National Institute of Arts and Letters.