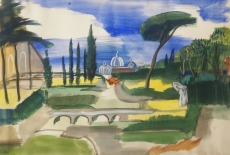 Born in Lewiston, Maine, Marsden Hartley moved with his parents to Cleveland in 1892, where he attended classes at the Cleveland Art Institute. After settling in New York in 1898, he studied under William Merritt Chase and later at the National Academy of Design, but his style was most greatly affected by Albert Pinkham Ryder and the Impressionist Giovanni Segantini. He had his first one man show at Stieglitz’s “291 ” gallery in 1909. Through “291,” he was introduced to the art of Cezanne and Picasso, whose ideas on structure he readily absorbed. While living abroad in Paris and Berlin from 1912 to 1915, his style was redirected toward abstraction by the influence of Kandinsky, Franz Marc and the Fauves. He worked in Provincetown, Maine, New Mexico, California and New York before returning to Europe in 1921. By 1920 Hartley’s painting had become increasingly representational. His later landscapes, endowed with a rustic power, express a strong romantic attachment to his native land. He returned to America in 1930 and traveled extensively while working mostly in Maine. In addition to painting, Hartley also composed poetry and wrote on modern art.