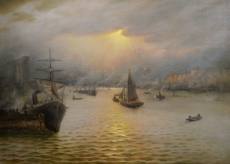 Jules R. Mersfelder was born on August 26, 1865 in Stockton, California when it was still a small frontier town. He began drawing at an early age and in his teens moved to San Francisco where he studied for three years at the School of Design under Virgil Williams. While studying at that school, he often visited the nearby studio of William Keith who offered criticism. Mersfelder then moved to New York City where he had a studio for a few years.

During his stay there, he exhibited at the first exhibition of the Society of American Artists. He also enjoyed the hospitality and criticism of George Inness and Alexander H. Wyant. He later exhibited in Chicago, Boston, Philadelphia, and Baltimore. He won a bronze medal at the Louisiana Purchase Expo (St Louis), 1904 and was awarded the Klio Ass’n prize at the annual exhibition held at the Art Institute of Chicago where 18 of his canvases were accepted by the jury.

He maintained a studio in Portland, Oregon in 1889 before returning to San Francisco in 1891. He was active in the local art scene when not out on painting forays in northern California. The year 1915 was spent in San Diego.

Mersfelder lived his final years in Berkeley, CA and died there on October 23, 1937. Although he made no known European trips, his works bear evidence of strong influence by the French Barbizons. Many of his landscapes of the rugged, old oaks of California compare favorably with those painted by Wm Keith during his late period. Mersfelder is best known for these dark, somber canvases; however, he also painted a few light coastal scenes.