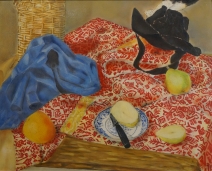 Still Life with Pears and Oranges

John Ferren was one of the few members of the American abstract artists to come to artistic maturity in Paris. A native of California, in 1924 Ferren went to work for a company that produced plaster sculpture. In moving from geometric abstraction to the academically based figure and still-life paintings he did after the war, and finally to the freely painted expressionist work of his later years, Ferren searched for a way to express moral truth. Throughout his life, he viewed painting as a means of seeking the reality behind appearance.

His early appreciation of Kandinsky and a fascination with Zen that dated from his youth helped define the way he thought about painting throughout his life. He called art the “great common denominator between knowledge and insight,” and said it should explore the intuitive—the spiritual, mental, social or psychological forces of life.