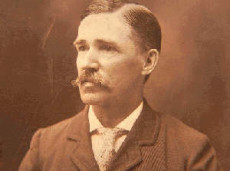 Edward Hill was born in England and came to America as a child.  He painted throughout New England, the American West and Europe. Beginning in the mid 1870s, and for fifteen summers, Hill was artist-in-residence at the Profile House in Franconia Notch.  In his art studio he exhibited paintings of the local scenes and sold them directly to hotel guests. In the early 1890s, Hill moved his art studio to Bethlehem, New Hampshire.  Hill also painted at the Glen House (1884), the Waumbek Hotel (1885), the Flume House (1894), Nashua (1895 to 1898) and in New Boston (1899 to 1901).  Hill was a prolific artist who painted every aspect of White Mountain landscape.  Hotel guests purchased his New England paintings and carried them to every corner of America.

He spent the last years of his life on the West Coast and died at Hood River, Oregon.  He was buried in an unmarked grave at the Idlewilde Cemetery in Hood River.  In 1983, sixty years after Hill’s death, a marker was placed on Hill’s gravesite with reads, “EDWARD HILL, 1843 1923, ARTIST.”