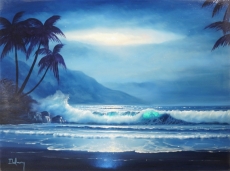 Delmary Dennis is a self-taught artist who has mastered the technique of glazing.  Her brilliant use of oils reflect a deeply personal expression of her love for light, color and the sea.

She has been one of the few artists to have been represented by one of the largest art galleries in the world during the years she lived in Hawaii.

Delmary’s art has stirred the sensibilities of thousands and her influence has reached many corners.  She has been the recipient of the Maharishi Award, which was presented to her by the World Government of the Age of Enlightenment.  Such honors have been bestowed upon Delmary as having an asteroid named after her, along with other Masters – Kandinsky, Chagall, and Dali.  The Delmary “star” or asteroid, which is actually a small planet, is registered in the Smithsonian in Washington D.C. and its counterpart in Russia.

Franklin Mint commissioned Delmary to paint a 12 limited edition “Dolphin Series”, to be reproduced on plates for Conservation International.  The collection was advertised nationally in publications such as People, Cosmopolitan, Reader’s Digest, Playboy and Parade Magazine.  The dolphin art prints along with her other works of art can be viewed and purchased in our art gallery.

Her long time friend and admirer, Walter Lantz, Dean of American Animators and creator of “Woody Woodpecker“, has written of Delmary, “I have been an admirer of Delmary for years.  She is an excellent painter who paints with her heart and soul.  She has a very unique style in her paints and her use of color and composition is outstanding.”

“Delmary is such an incredible artist using great colors. We met while both living in Hawaii and I bought one of her first paintings.  My home is filled with her paintings, Native American and beautiful ocean-scapes.  She is so real, I can see everything she puts into her work, the passion and spirituality.  We are the best of friends and have stayed in touch through the years.  I respect her as an artist and a person”, Ric Marlow, 1962, Grammy award winning songwriter, for the song A Taste of Honey, one of the most commercially successful songs in the history of the music and recording industry which has been recorded by approximately 250 artists.

Delmary currently resides in the Southwestern United States, with her husband Richard and their two Shetland Sheepdogs.  She has one son, her pride and joy, Aaron.