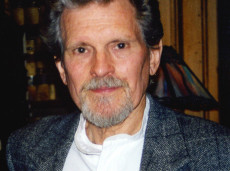 Delbert Gish was born in Oklahoma City but his family moved to the Pacific Northwest region when he was a youngster.  After graduating from Northwest Nazarene College in Idaho with a major in philosophy and a minor in art, he and his young wife, Marjorie, moved to Seattle where he enrolled in an art school.  He quickly realized that the curriculum was designed to offer commercial art training and withdrew at noon on the first day.

He begins each day thinking about his work, which is painting.  If something works or if he sees something that strikes a note, Gish admits, “My stomach churns a little and I’m driven to do this thing.  I don’t always know at the time if it’s good.  It’s like falling in love – it’s difficult to be objective.”  Delbert Gish studied under David Leffel, a master painter of portraits and still lifes, and spent two years as a student of Russian impressionist Sergei Bongart, later working as an instructor for Bongart.  Gish is known for his still life, portrait and landscape paintings and considers himself a realist painter.

Over the years his paintings have appeared in many juried exhibitions and in a wide range of publications.  Gish has received many awards and honors through the years but they are not goals for him and he rarely mentions them.  However, in 2004-05, the Frye Art Museum in Seattle, Washington, held a major exhibition of 100 of his paintings.   His masterful works are represented in galleries, museums and collections throughout the United States.