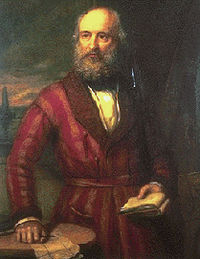 Charles Bird King studied art with Edward Savage in New York from 1800-05 and later with Benjamin West in London from 1805-1812. After his study in London, King spent a few years in Philadelphia and Baltimore before settling in Washington D.C. He quickly became their leading resident portraitist. He is perhaps best remembered for his paintings of American Indians, creating a 143 painting series; portraits of members of the five tribes of Native Americans who were visiting D.C. in 1821 as delegates. This immense project took him 16 years to complete and was shown in the National Indian Portrait Gallery (est. 1817). All of these paintings were later destroyed in the Smithsonian fire of 1865. Fortunately, oil copies had been made by Henry Inman. King was also an honorary member of the National Academy of Design.