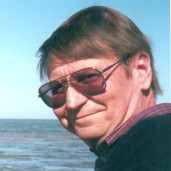 Allan Tubach was born in Falls City, Nebraska. He studied commercial art at the Omaha Art School from 1957 to 1958 and continued his art training at the University of Nebraska at Omaha. For over 20 years beginning in 1959, he worked for the Omaha World-Herald where he became Art Director and Color Coordinator in charge of the Art and Photography Department.

From the late 1960s through the early 1980s, he traveled to diverse locations in Europe and the length of Nebraska’s Platte River that resulted in a series about his travel experiences for the World-Herald’s Sunday supplement, Magazine of the Midlands. In 1974 he was featured in a National Geographic magazine story and described “as one of the Midwest’s outstanding young painters who explores the essence of life on the great American prairie.”

He has exhibited his work professionally since 1964 both nationally and internationally with representations in Japan through the Art in the Embassies Program, and in Paris at the American Painters in Paris. He was also a recipient of a Freedom Foundation Award for work at the Omaha World-Herald. In 1985 and 1986, he was an Artist-in-Residence at the Bemis Center for Contemporary Arts in Omaha, Nebraska. His work is now represented in over 500 private, corporate, and public collections nationwide and, along with his active exhibition schedule, he has been commissioned for various public art projects. In 1988, he was the recipient of a Nebraska Governor’s Arts Award, and in 2000, was awarded a Nebraska Arts Council cultural exchange residency in Jamaica. Today he continues to be an important and influential member of the arts community in Omaha. His public service has included the Joslyn Art Museum’s Board of Governors and its Acquisitions Committee, Landmarks, Inc.’s Board of Directors, United Arts Omaha Planning and Advisory Committee, and Omaha Public Art Commission, serving for a time as Chairman.